Infinity Ave by Robert Carl is an open duration piece, which first premiered as a performance on November 12, 2015 (seen above), and later as an installation in 2016. The piece itself consists of drones with carefully selected pitches and durations. It can be performed solo, left to run using its own algorithms, or interacted with by any number of other performers on their own instruments. The score includes many ways of interacting with the patch, and they exemplify the interesting structure of the methods involved in the piece.

At the core of this piece is a fascinating tuning system developed by Robert Carl, described by Robert in the score:

For the past fifteen years, I have been developing a harmonic practice that defines a series of “ladders”, made of the twelve chromatic pitches arranged vertically in their position closest to their counterpart in the overtone series. Thus, these vertical “rows” are register-dependent; they create voicings of harmonies that can be very open and tonal, yet still highly chromatic.

When transposed to different “fundamentals”, these ladders in turn allow for modulation from one to another, using common partials (for example, the example, the fifth partial of a series based on C–E–will become the first partial of a ladder based on E, etc.) If these common partials are emphasized, they can become pivots that allow one ladder to morph into another.

In addition to the tuning system, Robert also designed the self-running algorithm, the drone durations, and the essential structure of the patch. When Robert approached me about this piece, all that needed doing was the timbres/instrumentation of the drones themselves.

Robert handily gave me his ideas for how each ladder should sound (e.g. this ladder should have a strings based sound, or a woodwind based sound) and because this was a drone-centric piece, it seemed granular synthesis was the perfect tool for the job.

I first made short samples for each of the ladders and registers. This included bowed bass, cello, viola, violin, clarinet, flute, oboe, glockenspiel, celeste, and a synth. As each ladder spans a very wide register, they all contained a mix of instruments from the same family. Finally, the synth was used for parts of the last ladder as the register was high enough that pitch shifting  just didn’t sound as good compared to recreating the timbres in a synthesizer.

Once that was done, it was on the to the granular synthesizer. Adapting a granular synthesizer (seen below) built by Nobuyasu Sakonda, I rebuilt the process in gen while also removing some of the functions not pertinent to the uses in Robert’s piece. 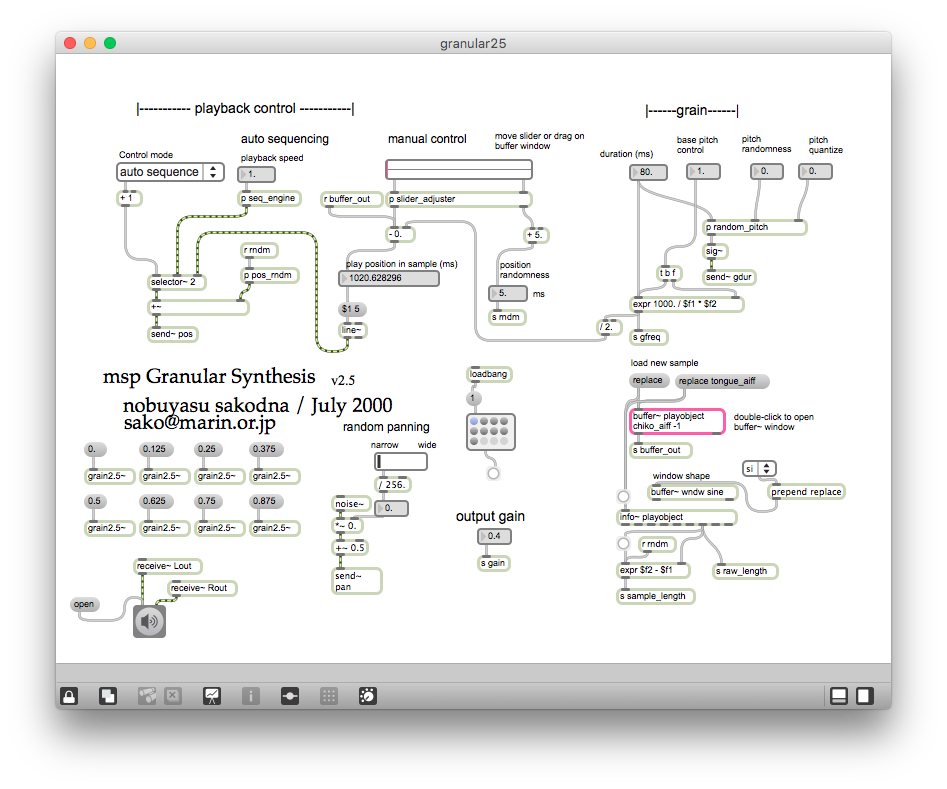 This great bit of programming was cut down a bit resulting in the gen internals shown below. I removed the auto-sequencing, pitch randomizing, and a few other odds and ends. All that was needed was being able to pitch shift (necessary with Robert’s tuning system), and to freeze a sample in place. Cycling through the entire sample wasn’t necessary, especially because I wanted as little amplitude fluctuations as possible. 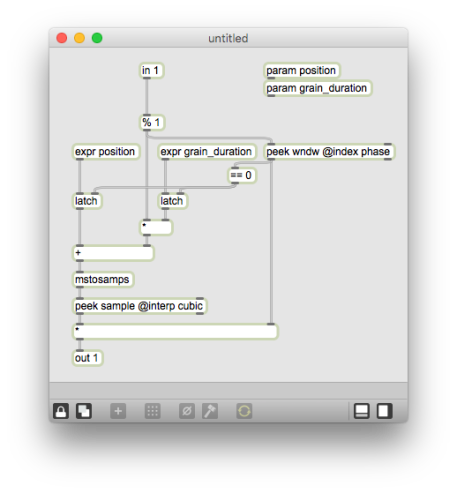 This gen patch was housed inside of the following abstraction made for the piece, called RCGV~. The arguments in order are buffer/sample name, position of the sample to freeze (0.-1.), random grain position range, grain duration, and pitch shift.  All these values were fine tuned for each voice of each ladder, in order to ensure the best resulting sound given each transposition and original sample.

Finally, due to the large amount of voices —72 drones, each with 8 grains, totaling 576 peeks— DSP management was necessary. For this, a slimmed down version of a “fade-in” patch of mine was used, which can be seen in the RCGV~ external view, above. The purpose of this patch is to be enable or disable DSP on a subpatcher while avoiding any clicks that would occur. (A writeup on the full version of this little patch will be linked here once it’s done.)

If you’re interested in performing this or having it set up as an installation, don’t hesitate to contact Robert Carl.