Built for and performed by Kenyon Williams.

Echolalia by Mark Applebaum is a “…theatric manifestation of shared psychosis and dissociative identity disorder…” that features a series of amplified and processed “dadaist rituals.”(score) The performer is instructed at first to rapidly carry out somewhat everyday actions such as typing on a typewriter, ripping sheets of paper, and slamming a book. Increasingly the actions become more bizarre, as an electric drill is used to bore a hole in the book, chopped carrots are wrapped in paper and thrown into a box, and a 4×4 is sawed in half, just to name a few of them. The piece closes with a triangle being struck once, being left to ring out after the cacophony.

All these actions are amplified and run through a series of effects. The score is pleasantly open-ended as to what effects are utilized —in fact it only states that a Muse Receptor plug-in player was used originally, but that it’s up to the individual performer what they want to choose. In this case, of course, Max/MSP was the tool to use.

In choosing the effects, I wanted the processing to not only complement the sounds of the actions being performed (of course), but to also follow the contour of the piece. A rising intensity was the idea, with some effects appearing early in the performance in a mild form, only to return a little later in a much more frantic and noisy reimagining. Then, as the piece comes to an end, a quieting down before the triangle is hit.

The first few effects are somewhat audibly sparse, as a means to introduce the bizarre actions that soon follow. They include a granulator built in Gen (seen below), an FFT-based spectral shifter/bender, a filtered spectral freeze effect, and a few more basic flangers and pitch shifters. 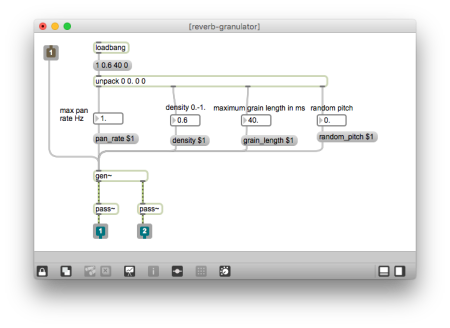 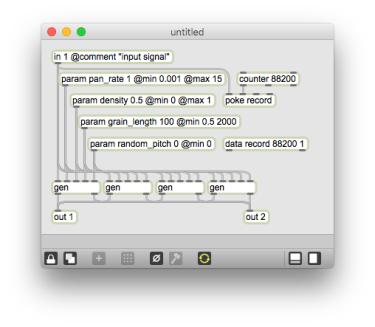 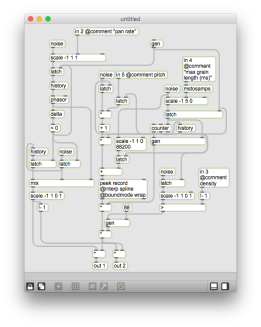 These give way to more apparent and “chattery” processing. As the piece deals with mental illnesses such as schizophrenia, the thought of hearing voices came to mind and informed these effects. This was accomplished with an attack-following granular stutter effect (which will be detailed and linked in another post), which serves as a more abrasive version of the granulator from the opening. The multi-voiced pitch shifter returns, but with a swirling filter effect, and the basic pitch shifter is also back, but ran in the feedback loop of a delay. Seen below, Gen is used to randomly determine the amount of shift in semitones. 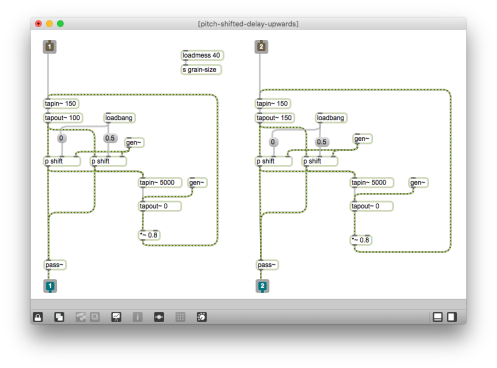 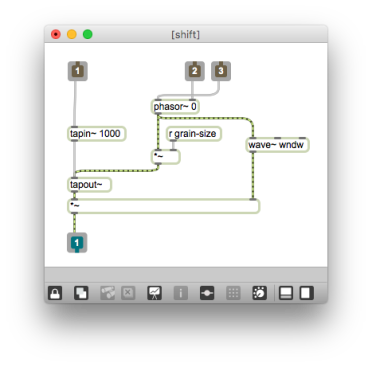 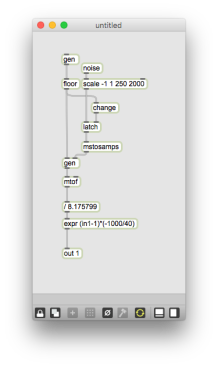 Gen is used to randomly determine the shift, in semitones

For the last third of the piece, all the major effects return as a sort of farewell. As the last few actions are quiet in comparison to the middle of the piece, I had them set to pick up whatever they could. The filtered spectral freeze effect is now unfiltered, capturing and freezing transients with six independent voices. The granulator is set to full density and pitch shift range, and the multi-voiced pitch shifter is put in the feedback loop of a delay. The result is a sort of fluttering away of noise, just before the triangle is struck.